You are here: Home / Archives for Whitby

Read the first part here: Whitby, in the footsteps of Dracula (Part 1)

“Perched high on a cliff, it’s easy to see why the haunting remains of Whitby Abbey were inspiration for Bram Stoker’s gothic tale of Dracula,” states the English Heritage website.

The story of Whitby Abbey in itself could be the subject of a book. This story begins in 657 with the foundation of a monastery by Hilda of Whitby. This monastery became one of the most important religious centers in the Anglo-Saxon world. Following the withdrawal of Roman legions from Britain, Northumbria emerged as a powerful independent kingdom. Members of the Northumbrian royal family were buried at the Whitby monastery, which shows the symbolic importance this monastery had at that time. The layman Cædmon, the earliest English poet whose name is known, lived and died in Whitby in the 7th century. The memorial to Cædmon has been preserved and can be seen in St Mary’s Churchyard.

Whitby monastery was abandoned in the 9th century, probably because Viking raids. In 1078, when Viking invasions were already history, a monk named Reinfrid founded a new monastic community at Whitby. Initially the monastery was built of wood, but in the 12th century it was rebuilt in stone in the Romanesque style. Later, in the 13th century, the monastery was rebuilt again, this time in the Gothic style. As many Gothic buildings, Whitby Abbey was built in stages, and the work continued with interruptions until the 15th century.

Following the Protestant Reformation in the 16th century, the abbey was abandoned and its buildings sold to Sir Richard Cholmley (1578). During the Civil War (1642–51), the Parliamentarian troops captured Whitby and looted the Abbey House. After the war Sir Hugh Cholmley II restored it and added a new wing, known as the Banqueting House.

The Cholmleys abandoned the place in the 18th century. The Abbey House suffered from storms and part of its roof was removed. Weakened by erosion, the shell of the abbey church also started to collapse. The south transept collapsed in 1736, the nave in 1763, the central tower in 1830, and the south side of the presbytery in 1839.

In the 19th century, the Strickland family, descendants of the Cholmleys, entered in possession of Whitby Abbey. At that time, the abbey ruins became a popular tourist destination.

In 1914 Whitby was shelled by a German fleet. The abbey ruins were hit and the west front was damaged. In 1920 the Strickland family handed the abbey over to the Ministry of Works. English Heritage carried out archaeological excavations and surveys at this site between 1993 and 2008. The visitor centre was built during that period.

Such is the story of Whitby Abbey. The symbolic importance of this building changed constantly over the centuries. Place of spirituality and knowledge, place of power, place of violence and tragedy, place of hope, place of leisure, place of artistic inspiration.

Why did Bram Stoker find inspiration here, among the ruins of Whitby Abbey? The past haunting the present—such has always been the main motif in Gothic fiction. Medieval ruins remind us that we cannot break from our history, at least not completely. Dracula is an intruder from our past; he brings with him the memories of troubled times and the ways of our ancestors. Yet we cannot ignore our medieval heritage. Whether it causes awe or fear, the medieval culture is still an important part of our civilization, and it will remain part of our culture for the decades to come. 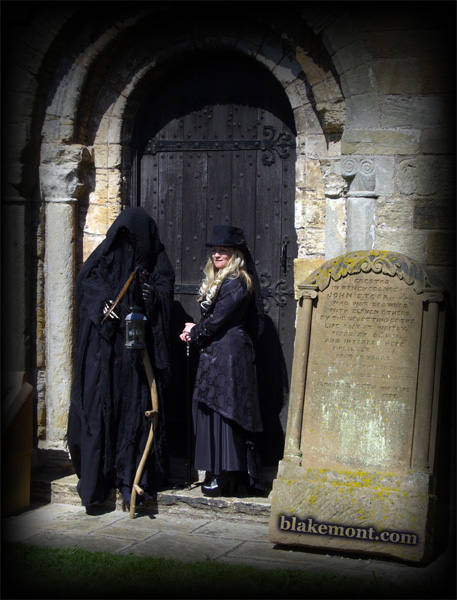 Twice a year, Goths, steampunks, vampires, and other alternative culture lovers flock to Whitby, a small town located in North Yorkshire, to attend the Whitby Goth Weekend. This festival has been running since 1994 and is one of the largest of its kind in the world. It’s a brilliant opportunity to see some imaginative, wonderfully scary, sometimes phantasmagorical costumes.

Now let’s cross the Whitby Swing Bridge and venture into Church Street. We meet couples in gorgeous Victorian or steampunk costumes. Some of them are kind enough to pose for the camera!

The feeling of unreality grows stronger. It’s difficult to believe we are still on Earth!

What? Vampires gathering in broad daylight! Did they drink fae blood? Call vampire slayers! I dial 913. “Hello, Whitby vampire hunters. How can we help you today?” I tell them what I saw. “Vampires on Church Street? Oh, this is normal, you see. No worries; they are vegetarian.” Ah. That explains a lot. “Good day, sir.”

Vegetarian vampires on the streets at noon? There is something fishy going on in Whitby. I’m glad I brought my vampire slayer kit with me. Just in case.

Okay, now let’s go up the stairs toward the Church of Saint Mary and Whitby Abbey.

The adjective “amazing” was invented to describe the kind of experience I had in Whitby, a small town located in North Yorkshire, UK. This is where Bram Stoker found inspiration for his famous novel Dracula (1897). Now I understand what he felt when he visited this town – I felt it too.

I arrived in Whiby on Wednesday 22 April after a 6-hour journey by train. Went to the B&B where I had made a reservation, checked in, then started my exploration of the famous vampire town. My first destination was Whitby Abbey, or, to be more precise, the ruins of Whitby Abbey. In the footsteps of Dracula, I climbed the 199 steps leading to the Church of Saint Mary and the top of the East Cliff.

Old tombstones surrounding the church greeted me solemnly. I turned to contemplate the setting sun that burned like a molten copper orb, bathing the cemetery in a warm orange glow.

I continued my journey toward Whitby Abbey, its ruins silhouetted against the darkening sky.

Suddenly, out of nowhere, a cloud of fog appeared to shroud the town in semi-darkness. It hung oppressively – as Edgar Allan Poe would say – over the bay, the valley and the town, eclipsing the last rays of the dying sun.

The cloud swiftly slid over the ruins of the abbey, as if some malevolent power had cast a spell. Then the cold came, this humid, traitorous, creeping cold that sucks the warmth out of your body. The change in temperature was as swift as the change in luminosity. The warm glow of the setting sun was replaced by an icy semi-darkness. This sight was surreal, as if nature itself had staged it for my benefit. I felt a connection, an inexplicable bond with this place – the ruins, the church, the cemetery, the old stones.

After this moment of awe came the realization that I was freezing. I felt the need to send some hot drink down my throat to expel the cold tentacles of the night. Destination – the nearest café!

Learn more about the history of this town in

Whitby, in the footsteps of Dracula (Part 2)